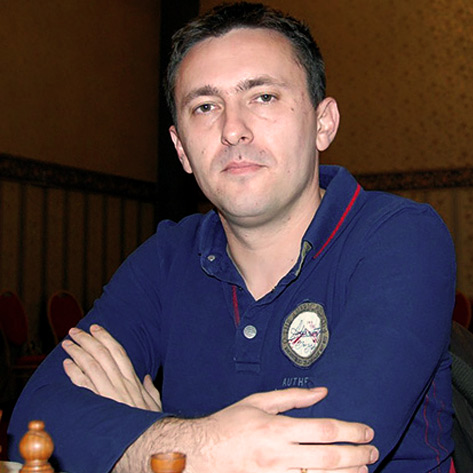 Born in 1977. He learned chess at the age of 5, watching his grandfather and father play. In the pioneer competition, he won the title of city and state champion standing out from the more valuable results. At the age of 10, he began cooperating with the International Master who was the selector of the national team, and probably the most deserving person for his professional chess career.

At the age of less than 20, even as a youngster, Ivan shared 1st place in the championship of the state. At the age of 22, he became a Grandmaster. Since 1998, he has played for the national team and played in 8 chess Olympics and 10 European championships.

In Leon, in 2001, he won a bronze medal on the 3rd board. Since 2007, he has been playing on the first board of the national team on a regular basis. Six-time state champion. He won national championships in six countries.

At the European Club Cup twice 5th place. Winner of a large number of tournaments. World Cup participant. Contributor to several professional books and magazines, including Chess Informant, New in Chess, and Chessbase. Author of two chess books. He helped as a second and coach some top players, who were in the top 10 in the world at the time.

Chess lessons and chess courses we offer are strictly private (one-to-one) and online, so you can learn to play chess from the comfort of your own home. Royal Chess Coaching Academy coaches use the most popular, well-established, and fast chess platforms during the training (Chess.com / ChessBase / Lichess / ChessKid), and the video communication with students is interactive and takes place via Skype, Zoom, or Teams.

We find the perfect chess coach that fits your needs

The chess lessons and training are completely personalized

You want to improve your knowledge through training with the best chess instructors and educators?